My partners recurve bow is well tuned. The arrow comes out very nicely. All bare shaft tests are sweet. The whole set up is bang on. String is centre with limbs. No warped limbs. Long rod is square. Arrow length is 26.5" and the pile is just left of the string. Bare shafts at 18m through to 50m are spot on, but the sight pin is still way over to the right on long and short distances. Sight track is parallel with the string. Me thinks it's the centre shot. My thoughts tell me that if we shoot at 70m and screw in (right hand archer) the plunger by a whisker then we will be back on track. If so then won't the arrows now land in the target with the Nock end leaning right? At the moment all arrows are landing square in the bale. Am I over thinking it? Confused.

Supporter
A couple of thoughts

1) Is the bow actually pointing at the centre of the target when it's shot? i.e. if you stand behind your partner when they're hitting the gold, does centring the string on the limbs just before release also align with the centre of the target? If the bow is pointing off to the left then that could explain why the sight is off to the right. I've just seen this with someone at our club who's shooting GMB scores in practice and was concerned about the sight being well to the right - At 70m the bow was aligning with the white at 9 o'clock despite good groups landing in the gold. Haven't quite figured out how that works yet - but it did explain the sight position.

2) Head position? Anchor? I'm not convinced that there is a single correct sight pin position because what happens if you start with a theoretical situation of everything being well tuned and aligned with the target, your sight pin being where you expect it to be and you're hitting the centre of the target. So when the eye, pin and spider align, the bow is pointing in exactly the direction it needs to (it's hitting the centre), but what then happens if you lean your head slightly to the right? - the bow is still pointing where it needs to, but the pin would now appear be off to the left of the line between your eye and the spider, and would need moving further right to bring it into the correct alignment for that head position, lean a bit more, and the pin would need moving more. But also what if there is no leaning, just a different facial shape, eye separation, head rotation, anchor point etc, all of which can potentially give a different lateral offset between the sighting eye and the nock, and so need a different pin position to compensate.

If the bow is well tuned and producing good results (which it sounds like it is) is it something to worry about?

Supporter
I've just remembered the YouTube video of Jake Kaminski doing a setup of his TFT - at about 35:15 he answers a question about sight pin alignment and says that it depends on lots of things, and that outdoors with X10s his sight pin is left of center, but indoors it's either central or slightly right!

Would it be related to pressure button strength if it is only at the extremes as in this diagram? 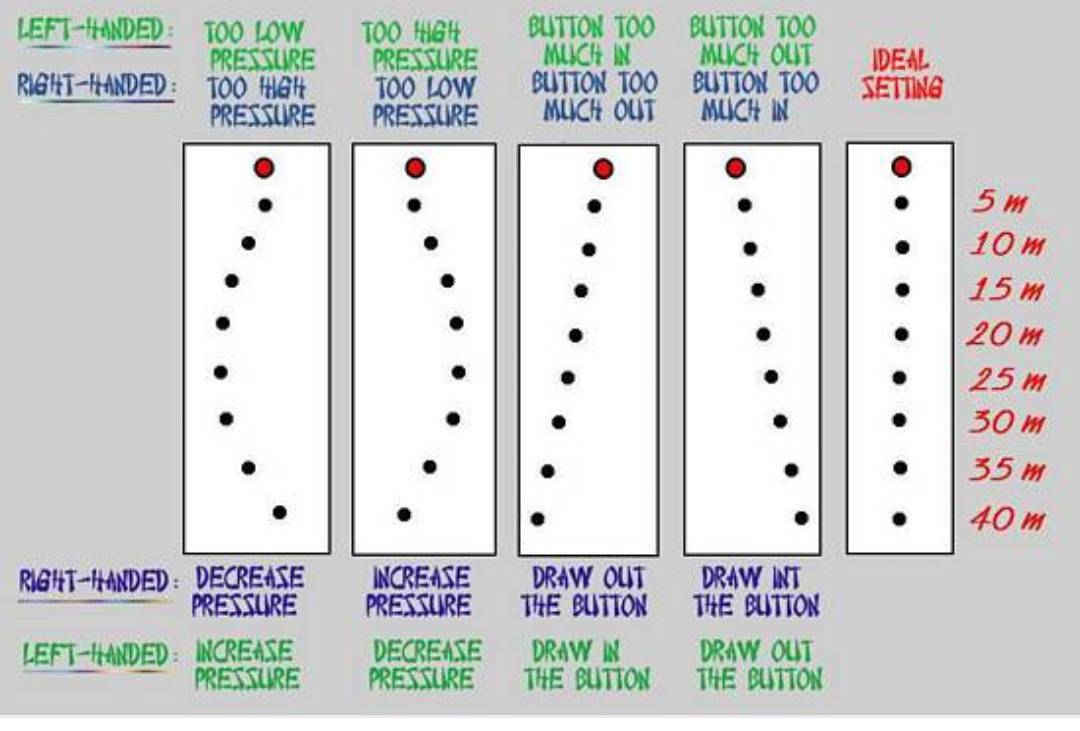 Sent from my H3113 using Tapatalk

Supporter
I think AndyS idea of seeing where the sight is pointing from the point of view he mentions. It is difficult to know what the archer is seeing and if the string blur is off to one side at full draw, it will show up.

Supporter
The usual routine is:
Check all the alignments (limbs, sight etc).
Move the sight pin back into the middle - in line or just over the arrow.
Set the button position as usual.
Shoot at about 30m and alter the button pressure until the arrows are hitting where the sight is aiming.
Then do your bare shaft etc (without moving the sight)
That should fix things if it's fixable.

The trap people fall into is moving the sight during setup. If you move it, then you're altering the alignment and anything you change will be relative to that new position. Yes, you can get it "tuned" to that sight position, as there's a continuum of "tuned" setups for any given kit, assuming it's matched. But the shaft is not actually leaving the bow straight, it's just behaving itself in flight.

Thanks chaps. Quality feedback as per usual. I'll have a scratch and see what I can figure out. I'll reply if it improves. S.

Staff member
Supporter
Fonz Awardee
Ironman
One last thing to add - if all your measuring and checking as suggested by the other respondents is ticketty-boo, I have observed the following from my own experience.

Shafts that would tend to be in the stiffer end of the group of spines I could use tend to finish up tuned but with a sight pin slightly over to the right (I'm right handed). If I'm working with spines that are slightly on the weaker side I end up with a sight rind more to the left.

Staff member
Supporter
Fonz Awardee
Ironman
Interesting, but I'd guess most of us have no idea where our node points are.